In 2013, an intrepid group gathered and began building a dream piece of software -- a 3D map based real estate software platform for commercial real estate research.  Meeting daily to scrum and bi-weekly in person, we dreamed of a future where it was easy to research and investigate the potential for any property with all the data in one place. This dream became Create.io and by January 2015 we had our first freemium release.

By January 2016, Create.io had launched a new premium release.  We held onto a loyal fanbase and attempted to find a foothold selling to existing commercial real estate enterprises. The biggest challenge was quickly evident, selling into the commercial real estate market place was harder than expected - most potential clients were intrigued, but then investigated building their own versions of our product with an overzealous urge to own every bit of their research platform. Most of these efforts appear to have failed. Meanwhile, getting traction in the commercial real estate market place was not going to be easy.  To help Create.io survive, the dedicated engineering team decided to form a small consultancy -- Clevermap Consulting.
In March of 2016, the possibility of a large enterprise contract was brought to the team, and work began to prepare for scaling the application in earnest. By the end of the year, the product included data for DC, Baltimore, and New York City. 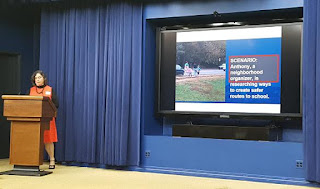 Meanwhile the development team was able to produce an attractive, useful, scalable and sustainable platform (see Create 2017 above). With the tooling we had built we were quickly able to generate white label-able sites with any new set of data from a new client.  The pinnacle of the product was a White House demo for our sponsors The Department of Transportation as part of The Opportunity Project.

Despite this flexibility, Create.io would eventually fold under the weight of the structural inequities in the technology side of the commercial real estate market place. After many months of work, these inequities forced us to walk away from a long sought $5m deal -- a deal promised in March 2016. By July of that year, out-lawyered and under funded, even with the deal in hand -- the clients position threatened to completely undermine our independence as a SAAS company (without a clear sale of the company) AND would have even put the individual engineers in a liable position.  The deal could not be signed.

That fall, despite restructuring, multiple attempts failed to rescue the company. By December 2016, Create.io had closed its doors as a business. Despite this, thanks to credits from Amazon the website was usable to clients until mid 2018 -- with just one server reboot, once!

In early 2017, the engineering team relaunched Clevermap Consulting and took on multiple projects to help all of the engineering staff transition to new work opportunities.

Clevermap served multiple clients building a variety of web and mobile based solutions based in React, php, React Native and node. Projects ranged from substance abuse apps to ed tech projects in a variety of domains including 7MinuteHebrew.com.

Despite never being thought of as a full time business, Clevermap has had a good run. All of our partners have found other roles and our clients have been transitioned to new contractors. Thus as 2020 ends, with everyone moved on, the partners have made the decision to let go of Clevermap Consulting.

With much gratitude to everyone on both of these intertwined journeys, Clevermap served its purpose, and as they say, all good things must eventually come to an end.

Popular posts from this blog

Design, build and invent your way to a startup, Part 1: The Invention Process

January 21, 2019
Design, build and invent your way to a startup Part 1: The Invention Process The process of designing and building software is an invention process. Like inventors, software designers are striving to solve a problem of consequence in the world. Whether driven by personal passion or economic savvy, s oftware designers may be entrepreneurs, digital designers, or developers. The best entrepreneurial teams include members who can wear one or more of these hats.   Along the way a disciplined software designer researches and refines the problem. We often call this process market research, but that is understating what really needs to happen. The software designer needs to know not only "what the client will buy", but what will drive them to come back to partake in the software again and again. And this is not a question that can be deeply answered in a single focus group. Yes, a focus group is a good starting point, but the problem definition must combine an intimate knowledge o
Read more

Why scrum? The "how to" of development teams in sync and in tune

January 30, 2019
As software development agile evolve, daily scrums are the pulse that create great projects. Small daily concurrent communications are a powerful tool for keeping teams in sync. We see this in the ever present use of tools like Slack. But in its most powerful form, daily stand-ups or "scrums" are concise communications following a specific formula. What did I work on yesterday (or this morning)?  What am I working on now?  What will I work on next? Any blockers? At this moment, in stand-ups occurring around the world, developers are alluding to the revelations they have found as they explore their working domains. Because stand-ups are daily, developers are able to concurrently inform teams about their explorations and also their inventive solutions.  As they work, developers are identifying key problems, inventing new solutions, refactoring both ideas and code, and helping each other, until the overall goal is met. The synchronization of the standup, helps to keep the devel
Read more